Abstract: Following the astonishing findings in an article published in November 2016 of a farmer preserving freshly harvested tomatoes in wood ash for up to 5 to 6 months, the research team at ECHO Florida decided to further investigate the potential of this technique to prolong the storage life of fresh tomatoes. We assumed that, in comparison to a control treatment of sifted sand, wood ash would extend the time over which tomatoes can be marketed or processed. To test this hypothesis, a randomized complete block design was used with tomatoes placed in boxes (4 tomatoes per box) filled with wood ash or sand. At the start of the trial, tomatoes were already ripe but unspoiled. Data were collected biweekly for tomato sugar content, visual quality, pH and carbon dioxide production. Differences in the measured parameters, between ash and sand, were not statistically significant. We were only able to preserve our tomatoes for 6 weeks. Differences between our findings and what the farmer was able to achieve could be related to ripening stage or source of wood ash. Future work could be done with tomato fruit at early (mature with slight change in color from green to red) versus more advanced stages of ripeness and with wood ash from various species of trees.

The 2016 article that prompted this research is entitled Burundi: Famer Finds New Technique for Preserving Tomatoes. 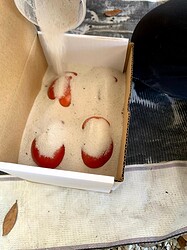 Although our results were not as encouraging as we had hoped, the research shed light on factors to measure that influence tomato ripening. A complete summary of this trial has been compiled as a Research Note available here. Other findings on the use of wood ash for preserving tomatoes can be found here. Examples of success with this technique were observed in Nigeria, Uganda, and Asia.

If you have tried this method or plan to experiment with it in the future, we would be interested to hear of your findings.

There is a variety of tomato selected for storage. It is called “Long Keeper”.
There are numerous sources of seed. It might be worth trying.

where can people buy this wood ash?