Extensive research has investigated postharvest control of insect pests (including maize weevil). Practices that have been studied include the use of resistant varieties (Abebe et al., 2009), airtight storage bags (Likhayo et al., 2018) and maize cob powder (Nwosu et Nwosu, 2012). ECHO has also explored the use of sealed containers using the following techniques/strategies:

All these techniques aim at reducing the amount of oxygen available to the pests within the empty spaces in a container, thus increasing their chances of suffocation. However, some equipment used to remove or replace oxygen may be out of reach to farmers and grinding maize cobs may be time consuming and/or costly. That is why we decided to investigate the control of S. zeamais by simply increasing the volume (of a sealed storage container) occupied by the seeds, which reduces the volume of air (oxygen) available to the weevils. We hypothesized that reducing air space within sealed containers will help control maize weevil in stored maize seeds by depriving them the access to oxygen. This approach works if the container is hermetically sealed, meaning that there are no leaks that would allow the movement of outside air into the container.

To conduct the experiment, we used 12 jars that we filled with maize seeds (Figure 1) as follows: 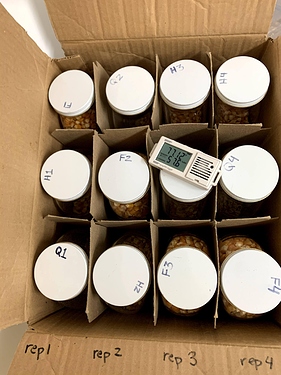 Trial Design (2).jpg3024×4032 530 KB
Figure 1: Overview of the weevil control experiment laid out as a RCBD with 4 reps and 3 treatments (F=Full; H=Half and Q=Quarter)
Twenty live maize weevils were added to each container before hermetically sealing (by screwing the lid on tight) and placed in a screened-in porch for six months at ambient conditions. At the end of the six-month trial period, response variables for which data were collected included the following:

Damaged kernels were those that were not whole, had holes, or had large discolorations from the weevil’s mandibles.

WeevilDamageGraph_small.jpg1779×1408 245 KB
Figure 2: Number of damaged kernels (black) and holes in kernels (red) for the three volumes of seed in jars with a regression line included.

In conclusion, these results fell in line with our hypothesis that the emptier the space within the sealed containers, the more oxygen available for the weevils, thus, the longer they will survive/proliferate and negatively impact maize kernels over time. Our findings suggest that filling up containers completely full of seeds, and keeping them hermetically sealed, can help control maize weevils in stored maize seeds by limiting their access to oxygen but may not complete control the pest population. This quite simple method of controlling weevils can help farmers reduce postharvest loss. This method can be coupled with some of the other strategies mentioned earlier to increase the weevils’ control in maize. Findings have implications for storing seeds for consumption or future planting.

Have you ever tried this method? What were your findings? Have you ever coupled it with some other techniques? Share your thoughts with us

Diatomaceous earth, a powder, seems like a potential solution. It can be very inexpensive and even nutritionally beneficial but sourcing might be difficult. This stuff would kill the weevils by tearing them to death with microscopic sharp edges.

I always wondered if a controlled fire in a hermetic sealed drum could reduce the amount of Oxygen in the air and kill weevils quicker.

We sometimes have 180 liter (44 gallon drums) half filled, and wondered if a burning paper dropped in jsut before sealing would help kill the weevils?

Hi Robert. Here at ECHO Florida we used an oxygen sensor to track the level of oxygen in a 5-gal bucket, sealed with an airtight lid, with a candle in it. Oxygen levels only declined by a few percentage points, and not to the level needed to kill weevils. See the intro section of the Dowel and Dowel [2017] paper, mentioned at the end of this post, for insights on oxygen concentrations at which weevils die or become less active. I’ve pasted a quote below, taken from the article that summarized what we observed. That said, people have told us that the candle method works for them. This could be due, at least in part, to CO2. In a sealed container, the level of CO2 will rise over time as the weevils and seeds respire. Whether you use a candle or not, hermetic/airtight storage is helpful, provided the seeds are dry—otherwise you are trapping moisture and creating conditions for mold. Hope this helps!

Quote from Low Oxygen Methods for Insect Control in Seeds
"With a lit candle placed at the bottom of a sealed and empty 19-L plastic bucket, Stacy Swartz and I measured the resulting O2 concentration with an O2 sensor. O2 levels declined from 21% (normal for open air) when the lid was first closed to 17% when the flame went out (5 to 7 minutes depending on wick length; in a room with the lights turned off we could see when the flame went out). We repeated this three times with similar results each time. Our finding is consistent with a report by Dowell and Dowell (2017) who, likewise, found that candle burning only reduces O2 by a few percentage points.

Like Monty, I would be interested in exploring the option of a simple, easily sourced solution. Sealing off large quantities of maize and other grains can be difficult under rural global south conditions.