All mature beans need cooking but some some more than others.
Velvet beans need very careful cooking and and in parts of Africa people fear they might be poisoned and die so never eat them.
People can certainly get sick but it seems no research has been done on velvet beans for many years.
Can someone assure my SSA contacts that that they can eat cooked velvet beans and and not die? 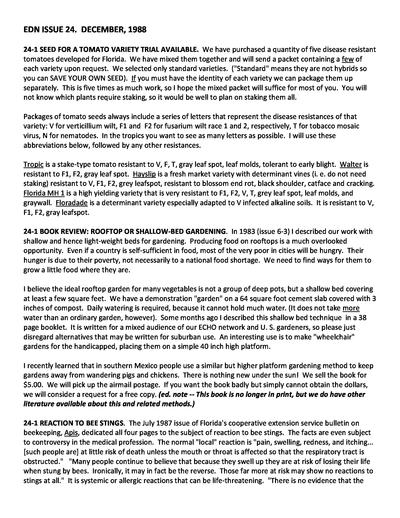 Is Velvet Bean Safe to Eat?

I am devoting three pages to this question because velvet bean is generating so much interest and the pressure to use it for human food is considerable. The multiple uses of velvet bean (Mucuna pruriens) as a green manure plant, for weed and erosion...


Currently (7/93), we offer the following guidelines. Has there been a failure of the bean crop in your area, but velvet beans are abundant? If so, it is almost certainly better to make use of velvet bean than to suffer hunger or protein malnutrition. Is the food situation a bit less desperate than that, but people still do not have enough to eat? If so, consider using velvet beans in moderation and not every day. Are there plenty of alternative sources of protein? If so, don’t eat the velvet beans. Velvet bean coffee has a lot of L-dopa in it. It should not be consumed regularly. EDN #37 for more details.]
Robert_Fairchild 26 September 2020 16:41 #3

In the present study, the effect of various processing methods on the levels of antinutritional compounds and in vitro protein digestibility (IVPD) of seeds of a potential South Indian under-utilized legume, Mucuna pruriens (L.) DC. var. utilis (Wall. ex Wight) Baker ex Burck (velvet bean), was investigated. Among the various postharvest treatments employed, soaking the seeds in NaHCO 3 solution followed by autoclaving appears to be more effective in reducing the maximum levels of various antinutritional compounds, such as total free phenolics (74–81%), tannins (74–83%), L-3,4-Dihydroxyphenylalanine (L-Dopa) (69–83%), phytic acid (85–86%), oligosaccharides such as raffinose (73–79%), stachyose (73–82%) and verbascose (71–75%), hemagglutinating activity (70–84%), trypsin inhibitor activity (72–81%) and α-amylase inhibitor activity (73–82%), and also results in significant improvement of IVPD (15–23%) of both the white and black seeds of velvet bean. Adoption of such viable processing method will enhance the utilization of velvet bean seeds as an alternative/additional protein source for both human beings and animals.

The recent research trend has been directed to evaluate the under-utilized legume seeds as an alternative protein source to meet the protein requirements of increasing human population and expanding livestock industries. In this context, the velvet bean ( Mucuna pruriens [L.] DC. var. utilis ) seeds receive more attention as alternative/additional protein source. Although the velvet bean seeds were found to contain high content of protein, carbohydrates and other nutrients, their utilization as food was restricted largely because of the presence of high concentrations of various antinutritional compounds. Hence, in the present study, various common postharvest processing methods were employed to remove/reduce the levels of antinutritional compounds of velvet bean seeds. From the present investigation, a cost-effective and viable processing method has been identified for the versatile utilization of velvet bean seeds as an alternative source of protein in the diets of both human beings and animals.

Articles related to the one you are viewing

The articles below have been selected for you based on the article you are currently viewing.

Exploring the Nutritional Potential of Wild and Underutilized Legumes

Effect of various indigenous processing methods on the α-galactoside and mono- and disaccharide content of an Indian tribal pulse, Mucuna pruriens var utilis

There are a few articles in this collection that may be helpful.

Velvet bean is a vigorous, nitrogen-fixing, bushy or vining, annual plant. The vines will climb anything available and can reach 10 m or more in length. Velvet bean is somewhat drought tolerant and is an excellent green manure or cover crop with...

@Neil_Rowe_Miller Might you have an answer for this question?