I would like to know more about pest and disease issues. One of particular interest is a devastating millipede infestation in one of our communities.

Thanks for your thoughts!

Do you know or have pictures of the kind of damage the millipedes are causing?

This is some of the information I’ve gathered:

There seems to be something out of balance going on.

Questions and thoughts offered: What is their primary food source - is there something of an answer in the fact that the millipedes are there at the start then gone? Has their real food source arrived? Could a delayed planting by 10 days or longer be the answer? Another mechanism to validate is SCALE - is this mulch blanket acting as the only available cover in the FGW fields, the only true climatic climax ecosystem available? So is the scale too small to be an indicator of pest activity?

Solutions suggested have been- Neem, one of the best natural pesticides available.
Other organic pesticides are great repellants which should work on millipedes.
There is a good one from Echo by Fuglie. (which I haven’t seen)

But I’m really feeling there is something off in the ecosystem- one factor being that it was an issue during traditional methods prior to the introduction of mulching.

@Noah_Elhardt, I read your facebook post – “Moustapha and Raymond transplanting millet seedlings into their mulched field. This is a strategy they are trying out to combat millipede attacks, which often decimate young seedlings in fields that were seeded later than the very first rains.”

Would you let us know how that strategy works?

I’ll keep you posted as we see how this works. No rain on the radar for a week, so we’ll see how they cope with transplant. Though with FFF, watering from a well could be an option.

We had a neighboring farmer try FFF a couple of years ago. He was the first non-intern to try it. He seeded a week or two after the first rains, and lost his entire crop. He hasn’t tried since.

This year, our communal class plots are flourishing: beans, sorghum, millet and corn alike (though we did have to reseed the corn due to bad seed). All of these were planted the day of the first rain. The interns were running a little behind, and most didn’t get their seed in until a week later, at which point they had nearly 100% loss on millet and sorghum and medium losses on beans, mostly to millipedes. Some have sowed heavy to overcome this. From what we’ve observed, the millipedes come out in mass about a week into the rainy season. If you have seed in the ground before the rain (as local farmers here do with millet) or if you are ready to plant immediately, I think you can get ahead of them. Otherwise, they can be pretty devastating. Several farmers/interns have commented on a link between mulch and millipedes, but I’m not yet able to define what that link is. It is certainly possible to have success with lots of mulch, but I think timing might be critical.

We asked Benoit, our ex-intern with the longest experience with FFF, if he has any problems with millipedes. He said yes, he does. How does he combat them? He kills every one he sees with his hoe. I guess he spends a lot of time in his field.

Attached is a photo of him showing the interns his corn field last Friday. It is by far the tallest cereal field I’ve seen this year, and this photo is after 19 days without rain. 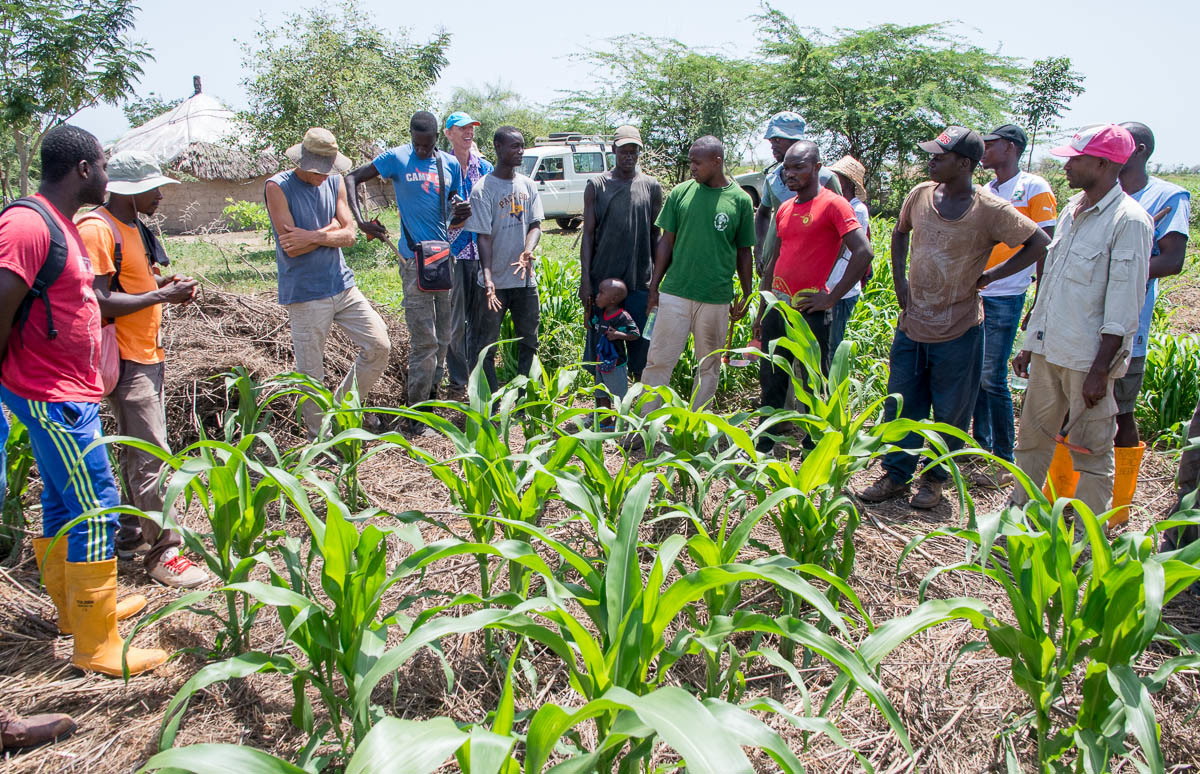 Greetings to all. In doing some reading, I came across a thesis by Ernst Ebregt on millipedes and sweet potato weevils in Uganda. Here is the link:

I’ll paste some content below that might be worth considering. I can see where it would be hard to design a research effort around an event that only occurs such a short time during the year. If you do try any of the trapping or baiting interventions, I would be very curious to hear how they work.

Below are some potential measures that appear towards the bottom of Ebregt’s thesis:

Handpicking of millipedes
During early morning hours and cloudy/rainy days in the beginning of the first rainy season (for example in north-eastern Uganda in March/April), millipedes can be seen moving around in abundant numbers. By then they can be easily collected by means of handpicking.

Trapping millipedes
Millipedes are generally active during the night. During daytime, they hide themselves in refuges. Preliminary research has been done, catching millipedes with baited pitfall traps, and with the help of piles of heaped grass/sweet potato vines or roof tiles.

Baited pitfall traps
In a preliminary experiment by the author, baited traps were planted in a sweet potato field. ‘Extracts’ of groundnut, sweet potato, cassava, and maize as well as molasses were used as baits. However, the baits and their constitution should be improved and other promising suitable baits should be tried out as well. The timing of installing the traps appeared to be crucial. Follow-up field experiments with baited pitfall traps in sweet potato, groundnut, maize and cassava fields should be done.

Grass heaps as ‘traps’
In another preliminary experiment, it appeared that piled grass in heaps, originating from a cleared sweet potato field, functioned as biological ‘traps’. The advantage was that local, low-cost material could be used. Heaped piles of sweet potato vines also did well. Field experiments should be designed and carried out.

Roof tiles as ‘traps’
In another preliminary field experiment, roof tiles appeared to be hiding places for millipedes during daytime. However, during hot sunny days millipedes dug themselves in the soil and were difficult to retrieve. Another disadvantage was that roof tiles were rare in the village. The efficiency of roof tiles or other possible devices, which function as a trap’, should be tried out in the field.

Use of botanicals to control millipedes
Despite the fact that the technique of preparing botanical pesticides is based on a simple technology (Stoll, 1992), these cheap control options have been ‘forgotten’ (Ebregt et al., 2004b). Preliminary research in north-eastern Uganda, in which extracts of the neem tree (Azadirachta indica), goat weed (Ageratum conyzoides), African marigold (Tagetes spp.), tobacco (Nicotiana tabacum) and chilies (Capsicum spp.), and ash and goat droppings soaked in urine were used, showed poor results due to logistic problems and dry weather conditions. Laboratory and field trials, in which the repellant and insecticidal effects of extracts of local plants on sweet potato weevils and millipedes will be determined, are crucial, as such trials can assess the relevance of control options, which fit in an integrated crop production and pest management approach in sweet potato, groundnut, maize and cassava.

I just wanted to give an update to our millet transplanting trials. To review, we lost some of our millet and most of our sorghum fields that were planted more than a week after the first rains this year to millipede predation during the seedling stage. This has been a problem here in the past, both on and off our farm. Because these were FFF plots, our interns didn’t want to waste the compost-filled, mulched zaii holes. As we were thinning other, successful, millet and sorghum fields (those that had been seeded with the first rain), many interns opted to take the plants that were thinned (ripped out of the ground), top them, and transplant them into their failed FFF plots.

11 days into the rainy season, we underwent a 3-week dry spell. Otherwise, this has been an average rainy season in length (3 months) and rainfall (~500 mm). We transplanted on days 32-35 (first rain after dry spell). We probably would have transplanted sooner had rains allowed.

Despite undergoing significant transplant shock (again, these were plants ripped out of a field, not gently transplanted from a nursery), both the transplanted millet and sorghum plots produced a harvest. Because of heavy bird predation on most of our plots, I won’t have meaningful data on comparative grain production, but as you can see from the pictures attached, the transplanted plots are significantly shorter than and physiologically behind the direct seeded plots, but are still producing a reasonable harvest. I would wager that the transplant shock could be reduced by starting seedlings in a nursery, and that transplanting them earlier in the rainy season (if the nursery is seeded before the onset of rains) would allow for a longer growing season and offset the impact of transplant shock. This would also allow one to get a few weeks ahead of the weeds!

Lots to try next year! 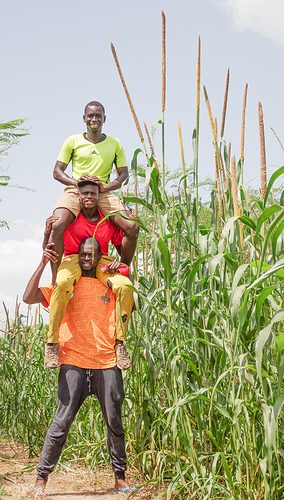 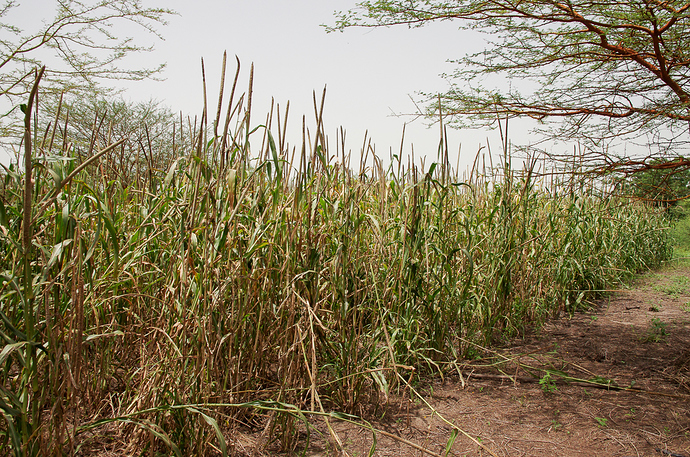 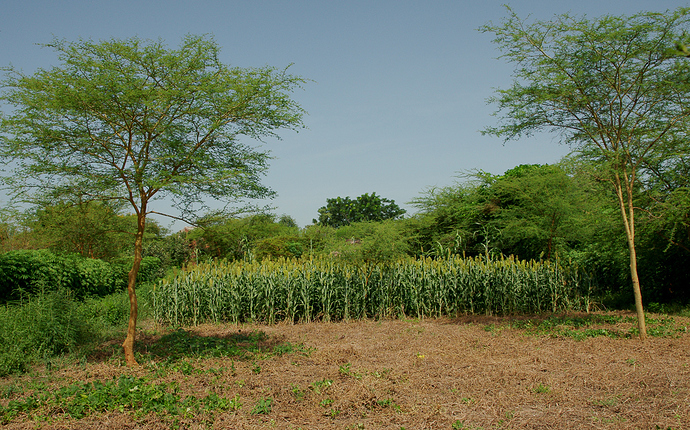 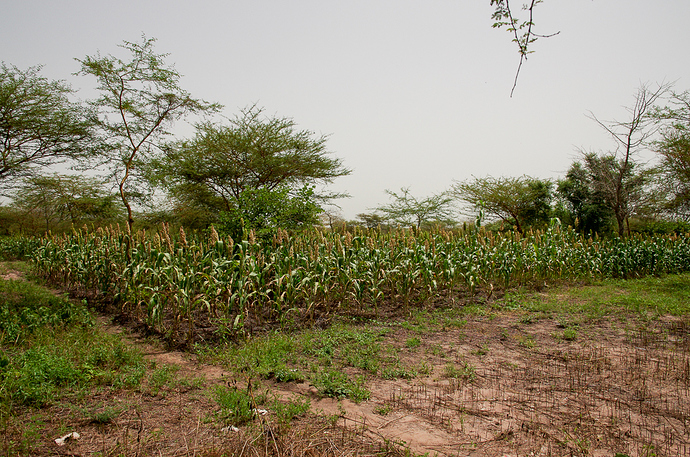