Recently did a simple test with Mombasa and this is to share the results.

We did the test planting only one seed in a one gallon plastic can that we use in our nursery for growing many different starter plants. I wanted to see what would be the result of planting only one seed. The one seed grew to be a bush creating numerous shoots. In other words, it reproduced in a manner very similar to vetiver.

The results of that test has saved us a lot of seed. Now when planting by hand, we deposit in the hole as few seeds as is possible…which we call “a 2 finger pinch” because it is as few as one can easily capture between a thumb and index finger. It is probably 3 to 5 seeds. We use the same planting technique as is used for planting corn or beans by hand… using a pointed stick to punch a hole in the ground and drop seeds in the hole.

We are very pleased with Mombasa. We find it to be highly productive and highly palatable and our protein tests have been typically in the 14% to 18% range. In most ways it is equally productive as King Grass because the stalk is very thin and the animals eat it without being chopped whereas the King Grass has a much larger stalk that the animals will only eat if chopped.

We cut it young, when it is about 1 meter tall. It normally obtains that height in 30 days. We do the same with King Grass while the stalk is tender so it does not need to be chopped before feeding to the animals. At least once a year we allow it to get a little taller and do a chop and drop as a green manure. A thick layer of green manure allows it to remain productive during our normal drought season.

King Grass can produce more biomass than mombassa when allowed to grow to the normal height of 2 to 3 meters as most people do in our area but at that size it has a high level of cellulose while the protein content drops significantly.

Can you post a photo of a Mobassa plant? I would love to see what it looks like. 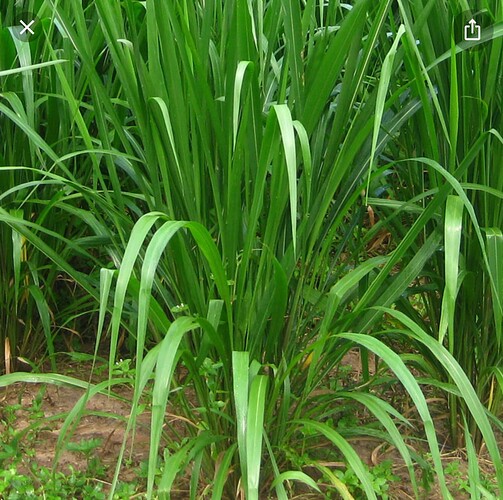 It is a tall slender plant with long slender leaves with very thin stems. Grows to about 2 meters in height. The “bush” gets to be about 12" diameter. at the base. Easy to plant with seeds. If short of seeds, divide a plant. Propagates rapidly.

One additional note. Apparently “Mombassa” is a trademark protected name or something like that because in Honduras, when buying Mombassa seed, one receives “Mombaca” seed. Seems to be same plant with with a slightly different name.

I am in Honduras and every feed store here carries the seed. I also see it available on the Internet; so it’s probably available in your area but if it’s not available, let me know and I will see what I can do. By the way it’s a hybrid that produces sterile seed. So you need to either buy seeds or get a plant from someone and divide the plant and it will propagate very quickly. Good luck.

it seems to be panicum maximum, more information here:
http://tropical.theferns.info/viewtropical.php?id=Panicum+maximum
(That site has an abundance of information on over 12.000 tropical plants, by the way…)

While kings grass seems to mean napier grass, is that right?
http://tropical.theferns.info/viewtropical.php?id=Cenchrus+purpureus

Martin, this is the name I am familiar with. Megathyrus maximus cv. Mombasa
But there are no doubt many varieties. In fact we have 5 different varieties at our farm school.

The description given of Panicum maximum at the site you listed says it puts out rhizomes whereas Mombasa does not. At least one bush of Mombasa will not create a second bush. The initial bush will grow to about 1 foot in diameter but that is the extent of its “spreading”. Could be that hybrid Mombasa is based on panicum maximum.

This link is for a seller of the seed.

Siambaza (Mombasa) Grass is higher quality with methods like direct grazing, cut and carry, hay, bailing, ensilage can be applied to our pastures.