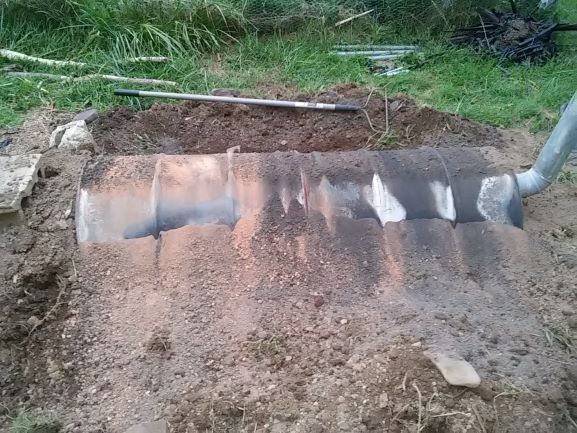 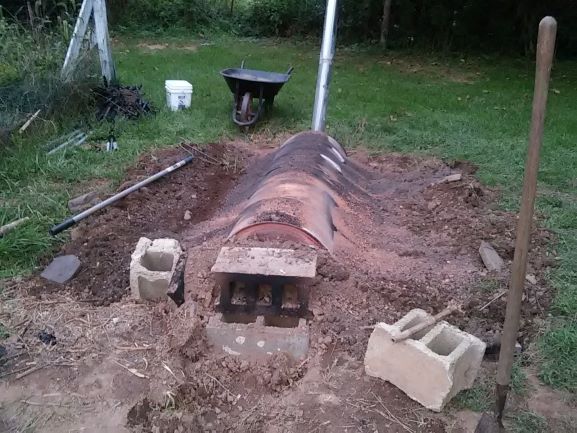 These photos are two halves of a 55gallon drum ‘seamed’ together lengthwise as a trial of covered trench biochar method. There is a chimney and the evidence of soil cover to insulate the kiln. I wanted to develop a method where the biomass could be placed in the trench, charred, and then mixed with soil from that location as a labor saving step in getting the biochar in place in the field. The kiln is aimed to be portable from one field or trench to another. However, I have not succeeded in achieving sustained pyrolisis, either because the gas flow from the inlet to the chimney is too weak, or heat loss, or some other factor. The hot air undoubtedly circulates rather than travels horizontally and up the chimney. Can anyone suggest where to go from here? Another drawback to the set up is that I cannot ‘see’ the flame or smoke condition at any particular location in the kiln due to the need to restrict oxygen levels. Thanks for any suggestions!
The photos are both from the stage where the inlet has been closed off. Two views taken once a heat of around 400C was measured on the hottest point of the kiln exterior.

Hi Jeff, The photos are not accessible as given. [I get a 404 Not Found error on the links] You can drag them into the Conversations message block for upload if you wish. Regards, Steve

I cannot drag from google photos to the editing ‘block’. I am attaching the photos to this email if you will be so kind to insert them wherever they fit. 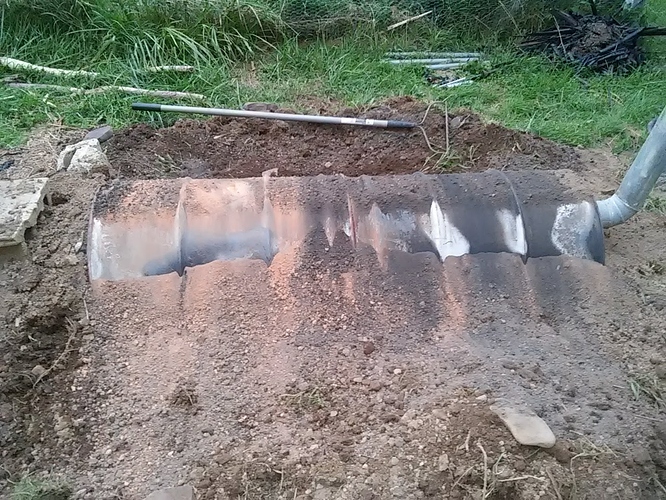 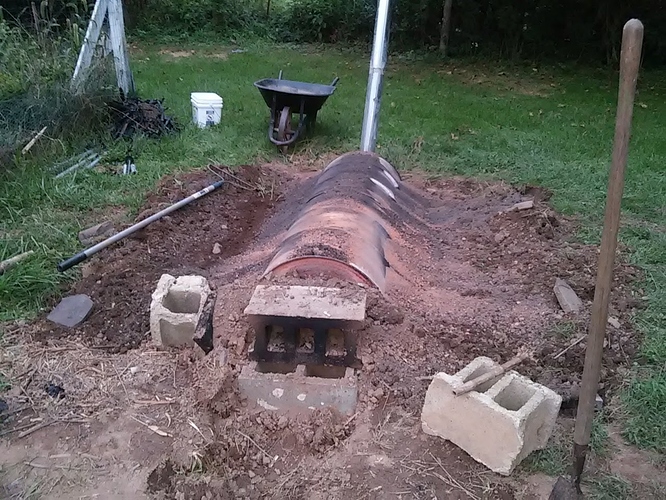 I was finally able to get cooperation from the authoring tool, at least that is my impression.

Thanks for your patience.

Looks great! and the permissions on your original links work now, also.

Responding by email with the pictures included works as well as ‘dragging’ into the message block. There are several options. Congratulations on finding one that works for you.

thank you. I look forward to posting more in the future.

I cut and paste a critical sentence from TN #76 about a stage in the kiln usage:
" When the smoke exiting the flue is bluish in color, reopen the outer vent about 50 percent for 5 to 10 minutes to flush out heat with fresh air. For charcoal being produced from larger wood, you can open the vent for 20 to 30 minutes."

Some bio char affiniados build a permanent vent into the midst of their kiln to allow “some” air flow during the burn. The Technical Notes state a few things which do not seem true for the covered trench design I have attempted- Exothermic process continues after the smoke becomes thick and white.(NOT!) Also, this technical note suggests that heat is being dissipated in the midst of the burn when venting is used. I suspect that an earthen trench like that in the picture actually works as a continuous heat sink so that heat venting is absolutely unnecessary. This of course is one of the purposes of trial and error, to find out the correct balance of Oxygen and Heat with the biomass. I believe that the Thai two barrel system is actually insulate better above ground than any kiln that is below.

Hi Jeff, thanks for your post! Unfortunately I don’t have much experience with horizontal drum kilns. I have had similar problems of maintaining pyrolisis the few times I’ve used our horizontal kiln. Maintaining the right air flow has proven difficult, and honestly a bit frustrating, thus most of the biochar we currently make at ECHO-Florida is with a top-lit-up-draft (TLUD). I have reached out to someone with more experience than myself to hopefully offer some advice on your specific questions.

I have a few questions for you in the meantime:

What sort of biomass are you using?
How much biochar do you hope to produce?
Do you hope to recover any byproducts like wood vinegar?

I ask because I have found the single barrel TLUD reactor to be a great solution for pyrolizing stuff like bamboo and the double barrel TLUD reactor for less uniform biomass. Both are relatively quick, easy, and transportable. If you are, however, looking to produce large amounts and/or capture the wood vinegar, the TLUD wouldn’t be the best choice.

Here is the response I received after posing your question to a former intern who has a lot more experience in char production than I do:

From the pictures it looks like he is fighting against the draft. Hot
air will always want to rise with respect to colder air. In the UHDP
pictures, you can see the barrels are set up on thin bricks to give a
few inches of head, and the firebox is flat on the ground. the wood is
also stacked on a grate to give free air movement below so that the hot
air passes under (and then rises into) the wood “baking” it. You always
want the biomass above the heat source and free upward air movement from
firebox through the barrel and out the chimney. You want your firebox
below your open space in the barrel, your open space in the barrel
(below the wood) below your chimney hole, and the wood all above the top
of the chimney hole (if possible).

Jeff’s system seems to have the fire box pretty high with respect to the
biomass he is trying to bake. My experience is that it even works better
than the UHDP method if you dig your firebox 6" to 1’ (or more if
practical) below the bottom of the barrel. this helps force the draft
through the system on startup.

Because of the thermal expansion and heat and associated chimney
dynamics, the relationship between air intake cross-section and chimney
cross-section is not at all linear. Small changes in stack (chimney)
height make huge differences in draft on the intake side. If I have
trouble getting a batch going, adding another 10’ of chimney will draw
the fire into the box wonderfully. Once the system is nice and hot I can
remove the extra and install vinegar collection system.

I would also put in a word of caution: the tars, gasses, and partially
pyrolized material associated with the charcoal making process can be
very toxic and persistent in soils. for agricultural/ soil amending
purposes I would not “make in place”. If you do, I would leave it open
at the end so that it cooks hot and clear for a while (losing much of
the char to ash) to ensure what is left is just pure carbon. Tars and
mineralized carbon (charcoal) can stay in soils for millennia - not
ideal if it is partially pyrolized and toxic.

Additionally, the vast majority of the long term benefit of biochar is
biologically related and is effective at very small percentages of the
overall soil. ideally clean, fully carbonized charcoal is
composted/inoculated/nutrient-charged and strategically placed in
(relatively) small increments as a platform for biology. In place
production will heat and kill any biology in the area, which is not ideal.

As Brad Ward discovered in his trials, because of the high energy
pyrolysis process, the charcoal is left strongly electrically charged,
and if it is placed as non-nutrient-charged/non-inoculated charcoal it
will “steal” nutrients from the nearby soils until they have reached
capacity. Often folks experience a strong negative affect on plant
growth for the first several years after placing
non-nutrient-charged/non-inoculated char.

Regarding the Tech Note, after reading through it I think it is mostly
correct (though I don’t fully agree with the promotion of charcoal over
traditional 3-stone), but not always super clear on the nuts and bolts
side. The venting discussed is referring to the vinegar collection
process, and the goal is to get the temperature back up hot to burn off
any residual tar after the long slow/cooler process of vinegar
collection. The entire process is definitely exothermic (if done
correctly) until after the chamber is sealed and all of the oxygen has
been consumed. The key is to not close up until it is clear and hot
coming out of the chimney to ensure that all of the tar has been burned
off.

These comments are precious. thank you so much Elliott and friend. I have been waiting for your help! I intend to try again with improvements, noting your concerns. More to come.

For those seeking more information on biochar production and use, check the ECHOcommunity collection : Biochar Resources
We’ll look forward to hearing more from Jeff. Does anyone else have experience to share concerning biochar or other topics?

I have three points in response for Elliott or his intern:

I am thinking about a ‘service type’ small business where a motivated farmer would partner with his village and develop expertise in making char sustainably. This way, he could guide them to only use ‘waste’ biomass, lay out areas where at the ideal time of the season he or his team could arrive and do the burn on behalf of the farm. He could provide coaching to the recipient farm and a fair monetary reward for his consultation. The equipment should be lightweight enough to transport farm to farm. As far as the usage of the char after inoculation is complete, those trenches can just be spread out and left empty once the char is relocated bit by bit into planting holes or gardens. This is the more detailed reason for my project. Thank you.

Hi Jeff, sorry for the delayed response. Here are some responses to your points:

Thank you very much for the detailed reply. I was just thinking about the redesign or reject question on this experiment the other day. You got me enthusiastic again.