What obstacles have you faced in promoting fuel-efficient cookstoves?

I have been offering feedback to a local inventor and volunteer (Wendell) on a rocket stove design. Wendell is only interested in designing a technology that truly meets the needs and desires of the consumer. As such, he is doing his fair share of “market research”. My hope is that this conversation could be a place that others who have worked with promoting fuel-efficient cookstoves could offer experience and advice. Here are the basic design requirements (in no particular order) he has so far:

Based on your experience, what other design requirements would you add? What have been some of the biggest challenges to widespread adoption of fuel-efficient cookstoves where you work?

Biggest challenge to adoption I have seen is the desire and habit of “playing in the fire”!

In Sierra Leone I attempted to demonstrate and recommend a rocket stove made from available blocks. Though it demonstrated itself fully advantageous…it was later dismantled as the ability to “stoke” the fire was not applicable. As my work was focused on Agricultural Development I was not able to spend the time necessary to show the system’s superiority. Stoking the fire was so ingrained, the adoption was lost. Will try again next trip! 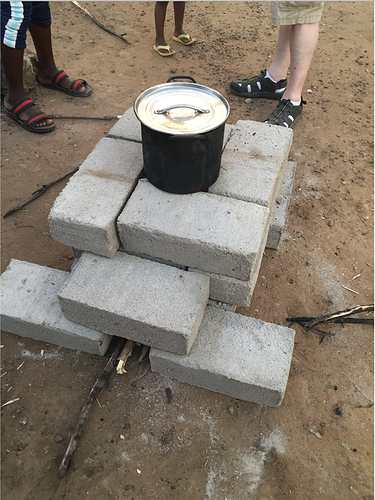 After seeing maybe 200 parabolic solar cookers abandoned in a refugee camp and only a couple being used, it seems people need a way to cook that meets the time cycles of their lives. They need training in how to use that new method to their advantage. The couple I saw in use were trying to heat shiny aluminum pots! They have to see an advantage in using the new method. The advantage they see has to outweigh the affordability issue. Those solar cookers were free, but they didn’t provide enough advantage of not having to secure firewood to offset their time inconvenience of waiting for the sun to cook. It has to fully meet their needs in a way better than the current methods of cooking do. If the new method gives a family status, they are more apt to adopt, but will they USE it? How does the new item provide status?

Cost is the biggest obstacle. A stove with good performance is not cheap.

WITHOUT A POT SKIRT IT’S NOT A ROCKET STOVE AND WILL NOT SIGNIFICANTLY REDUCE FUEL CONSUMPTION!

We have tried several different models of stoves and found that a type of rocket stove with a chimney that can be build with a simple earth/straw/dung-based mixture was liked the best by the women who had the opportunity to use different types.

What I would emphasis is that we do not start with community members on practical issues like a stove without discussing at length biblical principles of stewardship in our transformational development dialogue education and training - We start at the beginning by reflecting on the four relationships God established for us etc. In our experience, addressing the mind-set / worldview lays a foundations that motivates change from within. This, in our experience, makes a significant difference in adoption. Of course, practically the technology still needs to be appropriate and fit people’s needs.

The famous ‘Lorena stove’, designed by Ianto Evans in Guatemala after the 1976 earthquake was one of the pioneers of fuel saving cooks stoves. In the early 1980’s, no matter what other project Peace Corps volunteers were to work with, we were trained to construct and promote these stoves.
Over the years many, many new designs, devolopement workers and agencies worked on the important effort to save cooking fuel, fuel costs, reduce smoke contamination and to try to convince people to use these stoves.
In the 1990’s the ‘rocket stoves’ appeared, and the same Ianto Evans returned to Gautemala, invited by the minister of agriculture, to design an ‘appropriate’ rocket stove.
I’ve watched fuel efficient stoves being designed and promoted for 40 years and have yet to see any ‘catch on’ and revolutionize the way cooking is done. Maybe somewhere they have, but not here. I’ve talked with devolopement workers from other parts of the world, and the common story seems to be great designs and significant investments with abandoned, unused stoves.
The only successes I have seen have been where the stove promoter/designer actually uses the stove in his or her own home every day, year in year out, as their preferred cooking method. Do you cook with corn cobs, dung, tiny sticks? It doesn’t work to go home to your gas or electric stove. The stove you use for your own family is the stove you are truely promoting.

Social acceptability - when it enables people to cook the food they have already eaten with ease. A situation where cooking of a staple is a hassle means they have to revert to the inefficient three - stone stove ‘monster’

Hey there! I am a past intern at ECHO and would love to provide some insight on this topic.

I spent three months in 2017 working with Care of Creation Kenya researching the use and adoption of fireless cookers in 6 communities surrounding the small town of Kijabe, Kenya. We interviewed about 100 women concerning the use and adoption of fireless cookers. Some of the women had already been using the cookers, while others had not yet adopted them and were interested in learning how to both construct and use them.

"Seeing is believing" was a prominent theme throughout my research. The women greatly appreciated demonstrations of how to cook with the new technology. We took measures to cook traditional foods (rice, stew, ugali) in front of the women so they could see (and taste) for themselves the successful results.

Another obstacle we faced in promoting the fireless cooker was a lack of awareness of the inefficiency of their traditional fuel sources/cooking practices. In a participatory ranking exercise with a large group of the women, we prompted the women to discuss and estimate the overall costs of using firewood, charcoal, an LPG gas tank, and a fireless cooker for a typical Kenyan family during a particular season of the year. We facilitated a discussion in which the women were free to argue, discuss, and come to their own consensus on the various fuel costs using their own criteria and specific cultural context. To the women’s surprise, their own calculations portrayed that LPG gas tanks are actually cheaper than firewood. (Most women initially thought firewood was cheapest). Furthermore, they were able to see how using the fireless cooker alongside the gas tank (and the other cook-stoves) would cut their cooking expenditures drastically. Overall, this exercise was effective for revealing to us the importance of addressing common misperceptions surrounding cooking fuel costs to allow women to see for themselves the money they could save in the long-run by investing in a fireless cooker.

This brings me to another important barrier to adoption–the idea that the adopters must completely give up their traditional ways of cooking in order to adopt this new technology. While complete replacement of inefficient fuel sources may be the long-term goal, it is helpful to present this new technology as a cooking method they can “stack” with their traditional fuel sources, not replace altogether. Therefore, it would be helpful to present and design this new technology in a way that compliments and can be used alongside the traditional method (even if just for a little while before they feel confident enough to completely replace their inefficient methods). Taking small steps towards success is key.

With respect to point #7, A delight to use, we did find that the women were more likely to both construct and adopt fireless cookers that were aesthetically pleasing. This posed some issues with cost, seeing as how the more aesthetically pleasing baskets were more expensive to make. While we demonstrated that even a plastic basket, one often used for laundry in their context, could be transformed into a fireless cooker, the women preferred not to use it because of the associations a plastic basket had with dirty clothes. Therefore, creativity in “beautifying” the technology may be necessary for successful adoption.

If anyone is interested in reading the equivalent of a thesis that I wrote on this research, presenting the fireless cooker as a holistic poverty alleviation tool, please reach out to me. My email is ekinzer@echonet.org. My paper also includes relevant discussions on the social, economic, health, safety, environmental, and spiritual factors related to adopting cookstove technology.

Attached is a poster I presented at two of ECHO’s conferences, one in Thailand and the other in Fort Myers. Fireless Cooker Poster.pdf (937.6 KB)

In my research with Care of Creation Kenya, we also discovered how important it was to learn about their worldviews and mindsets surrounding this topic. It really helped us understand where the women were coming from, and how we could best introduce the new technology in a way that made sense to them. After having heard their own views, we were able to discuss biblical stewardship principles as a foundation for transformation.
It of course helped that the majority, if not all, of the women we interacted with were already Christians. This approach could (and probably should) look different and unique depending on the current worldviews of the audience.